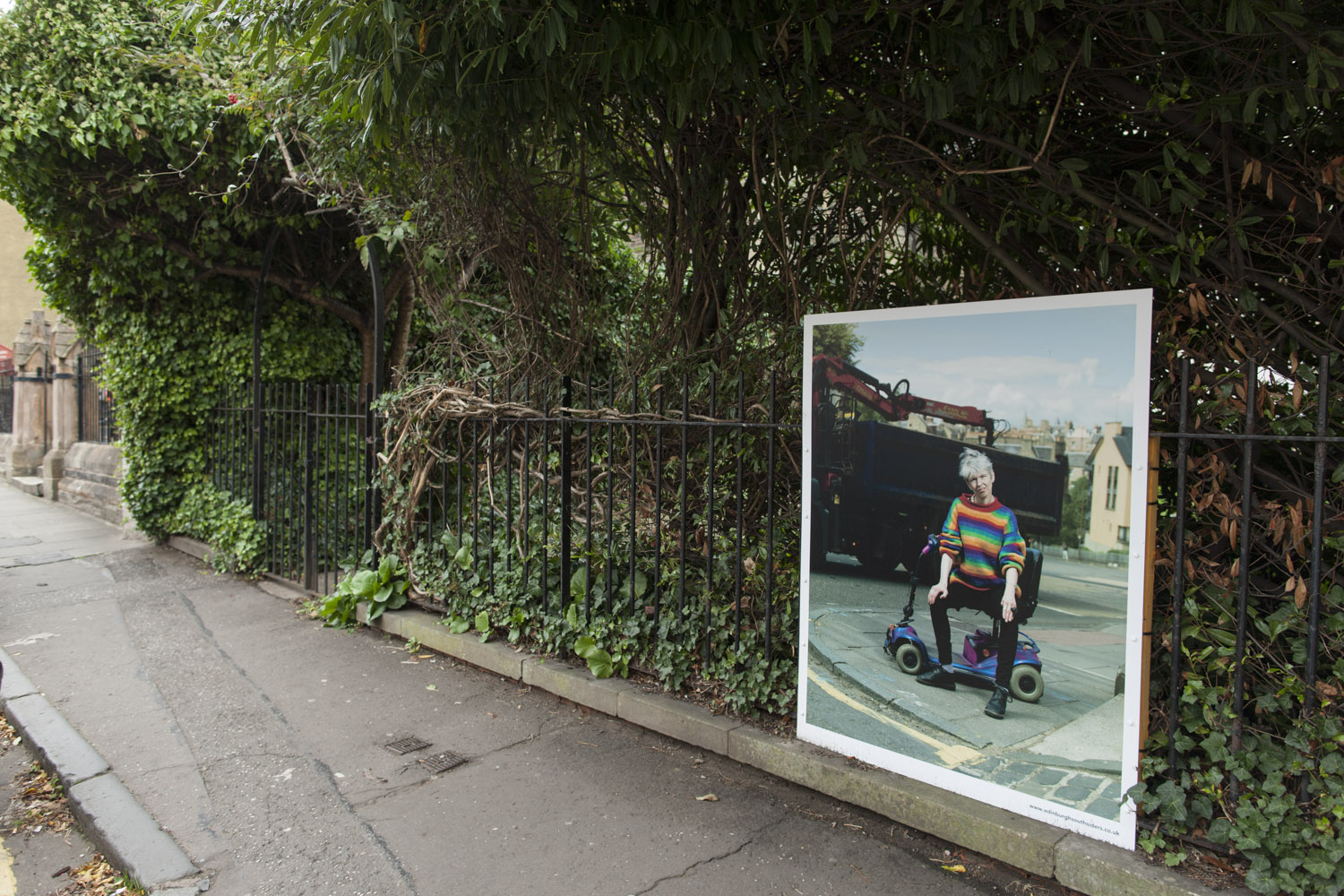 Some thoughts on doing the design for a photographic arts project in Edinburgh’s Southside community.

My mother calls me to tell me how much she liked to read the publication with the stories of the Southsiders. I had just given it to her an hour earlier. I tell her I will forward the compliment. My mother is a good emotional indicator, she feels a good story when she sees one. And her remark reminds me that I wanted to write down my impressions about this project.

It has been a very intense and truly pleasurable task to do the design for „Southsiders – Portrait of a Community“. It has been a good collaboration and I am proud of the result.

When I first heard about the project sometime beginning of this year, I was immediately keen to work on it. I liked the concept of making a series of portraits in this distinct quarter of Edinburgh, to grasp the specifics of the area and it’s inhabitants.

I knew Pete’s photographic work and thought that he would deliver very good portraits. And what appealed to me as well was the fact that Pete and his collaborators had planned to show the work in public space, a website and a publication distributed for free in the community.

This cross media approach, which was aimed to create a dialogue between the people portrayed and the community, made great sense. And fitted well into my own expertise and interest as both an artist and a graphic designer with a focus on editorial design.

I was very happy when I could convince Pete and Shona Thomson (who wonderfully managed the project) to hire me as designer for the project.

I was first working from Berlin, where I am based, we managed to come up with the overall decision about how we wanted the project to „look and feel“. It should be simple and modern, the design decent and in the background. It should feel accessible, yet with a precision which would present the images and the stories as important as they are.

Meanwhile the portraits were being taken, both as photographic images and interviews. Whereas I never got to see more than one image (it was the one of Caroline) before I finally came to Edinburgh, the sound files started to be edited and gradually uploaded to our working space.

I started to listen to the stories of Kevin the gravedigger, the Lollypop Lady, the physician and art collector. I was struck and truly touched! To hear these voices and their stories was amazing, each of them seemed to have such a unique and witty approach to life. Im my head an image of the Southside community, which I had never consciously visited, started to build up and accompanied me in my further work on the grid of the publication an the website.

It took another couple of weeks before I finally got to Edinburgh, to the Southside and Pete’s studio at Summerhall, where I finally got to see the images! To see them finally was a fascinating experience. I was a bit afraid, that they might let me down, after I had already generated my own characters fitting the voices and their stories. Fortunately this wasn’t the case at all. The portraits gave another insightful reflection of the people’s identity which worked so very well with the sound.

After visiting the site for a few times, seeing the locations of the images and some of the protagonists “live” in the streets, I became even more convinced that this collection of 32 Southsiders portraits was more then a glimpse into the social fabric of the Southside community. It succeeds to present an insight into a local community and at the same time to tell a story about the relation of individuality and society on a very general level. This relationship is reflected in the way the portraits interact with another and also in the individual interviews. The interviewees were asked how they related to the project „Portrait of a Community“ and in their answers it becomes very clear that they consider the act of their photograph being taken as their contribution to a dialogue, as an attempt to present themselves as individuals but also as a part of a group.

To achieve this level of interaction is admirable. And even though I haven’t seen Pete in action taking the portraits I could witness on a daily basis how he was able to create this sense of involvement: he is a natural born socializer (I don’t think this word exists, but it seems so fitting!). Even in the most stressful moments, we couldn’t even walk to the park – which was literally at our doorstep – without Pete chatting warmly to everyone we met. I was amazed how he could interact so humanely in moments where I could only focus on the selection of the right printing profiles. I am convinced that also the attentive presence of Joe, who besides assisting Pete in taking the photographs, recorded and edited the sound was very helpful for the way people opened up and presented themselves.

Of course you can say „Everyone has their own story“. It is true, obviously. Nevertheless to tell the story – or in the case of a project like this to mediate the stories of others, isn’t so easy. Much depends on the way the people are photographed and recorded. As for the image there are the formal aspects of the singular image and the series. In what way people are shot, if there is a strong formal concept or a rather loose one, which tries to incorporate the individual. Besides the formal aspects, the before mentioned interaction between the photographer and the person photographed is crucial for the „success“ of a portrait.

In my opinion this project succeeded in creating a portrait out of many portraits, to speak about individuals and social interactions at the same time, and all of this in a modest way, where it is left to the beholder to experience, think, smile, or even cry about the beauty and weirdness of life.

Needless to say, that it was great to be part of it and I am happy to make my part in putting all the material together in the publication and this website.

It is hard to believe the exhibition is already over and with it the distribution of the publication.I would have loved to see the images still there on my next visit. What remains is the website where you can hear the voices of the Southsiders. And hopefully there will be an opportunity to see all 32 portraits displayed together, maybe even outside their natural habitat.